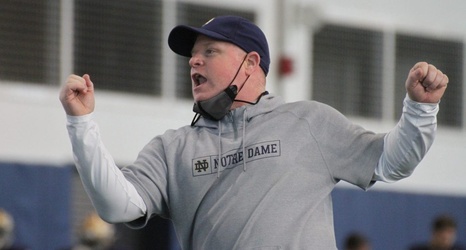 If Notre Dame needed a change in the recruiting office, Mike Elston felt it was only because of the success Brian Polian had produced as the recruiting coordinator the last four years. And if the Irish needed a new right-hand man for Brian Kelly, Polian felt he was an obvious choice to take some of the head-coaching duties off the head coach’s plate.

Thus, Kelly swapped Elston’s and Polian’s secondary roles this offseason. (Or perhaps they are the primary roles? Splitting hairs, to say the least.) Elston, better known as the defensive line coach, became Notre Dame’s recruiting coordinator this winter, a job he held earlier in his 12-year stint as the only assistant to last all of Kelly’s tenure in South Bend, and Polian, also the special teams coordinator, became the Irish associate head coach, a nod toward his past as the head coach at Nevada between stretches at Notre Dame.