Notre Dame: Khalid Kareem was Defensive Player of the Game vs. Navy 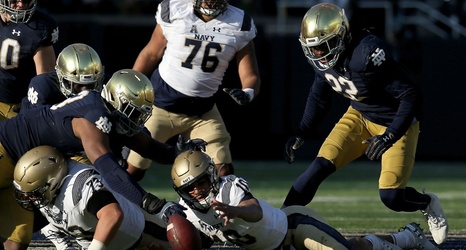 Defensive end Khalid Kareem was dominant for Notre Dame football on Saturday afternoon in the win over the Midshipmen of Navy. Here were the standout defensive performances from that game.

The veteran linebacker impressed fans once again. Bilal made a couple of big plays early on — one being a tackle for loss and the other a fumble recovery off of the first of Khalid Kareem’s two forced fumbles. Asmar Bilal finished the day with a total of five tackles — one of which was for loss — and a fumble recovery.