Notre Dame Jumps Back Into Top 10 Following Dismantling of Wisconsin 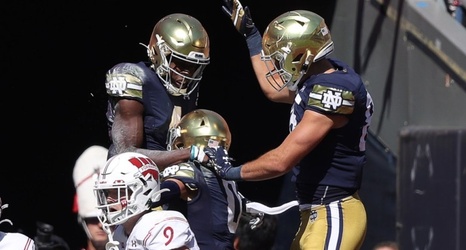 After three underwhelming performances to start the season and then three relatively underwhelming quarters of football on Saturday, Notre Dame’s fourth-quarter explosion against Wisconsin not only vaulted them to a blowout of the Badgers, it pushed them back into the AP Top 10. On Sunday morning, Notre Dame checked in at #9 in the new rankings after a rather chaotic weekend left sent other programs like Clemson tumbling.

Notre Dame started the season in the top 10 in the AP rankings, but their close call against Toledo saw the Irish fall to 12th, where they held after last weekend’s comfortable win over Purdue.