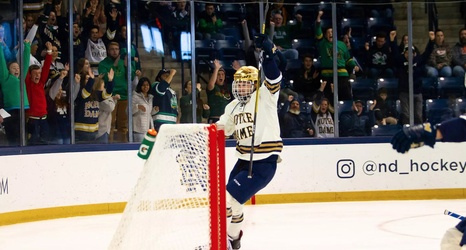 After opening the season with a win Friday night, the Notre Dame Fighting Irish Hockey team completed the sweep today over the Air Force Falcons with a 6-1 win. Notre Dame opened the game quickly and controlled possession almost from start to finish, although the offense didn’t have much to show for it until a four goal outburst in the third period. With the win the Irish improved to 2-0 on the young season.

Notre Dame began the game on the offensive and opened the scoring early. Three minutes into the game Cam Morrison intercepted the puck in the neutral and carried into the zone from the right wing, eventually letting go a shot from the faceoff circle that beat Air Force goaltender Zach LaRocque on the far side.