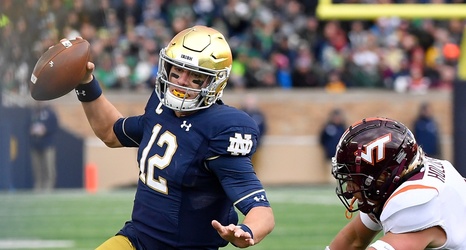 PASADENA, CALIFORNIA - JANUARY 01: Jack Coan #17 of the Wisconsin Badgers throws a pass against the Oregon Ducks during the first half in the Rose Bowl game presented by Northwestern Mutual at Rose Bowl on January 01, 2020 in Pasadena, California. (Photo by Sean M. Haffey/Getty Images)

The Notre Dame football team got better at the quarterback position on Monday, as Jack Coan announced he will transfer to the Irish.

This offseason, the Notre Dame football team faced the daunting task of replacing the winningest quarterback in the history of their program.