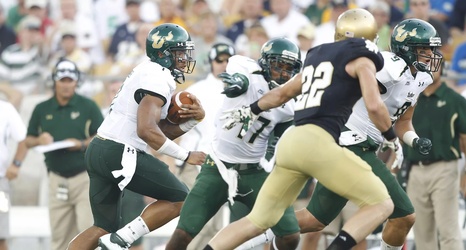 According to a report on Irish Illustrated by Tim Prister, the Notre Dame Fighting Irish will play the South Florida Bulls on September 19 in South Bend. The Irish were originally scheduled to play the Western Michigan Broncos, but their season was cancelled after a decision by their conference, the MAC.

Notre Dame famously last played South Florida in 2011 as the season opener. It was a game that was delayed during regulation due to lightning from a thunderstorm. It’s also the famous “Purple BK” game as Brian Kelly lost his temper on the sideline with Irish receiver TJ Jones.