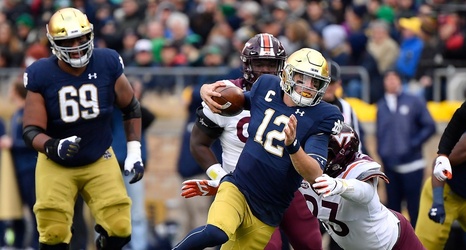 A dual threat quarterback makes a college offense exciting and deadly. Whether it is Michael Vick’s Virginia Tech, Marcus Mariota’s Oregon, Lamar Jackson’s Louisville, or McKenzie Milton’s UCF, the thing that made them all deadly was the threat’s those quarterback’s posed. They could light you up through the air, or on the ground. This left too much to defend. Notre Dame might have something like that right now.

No one is going to pretend Ian Book can run like them, but he is an athletic runner. He’s proved that recently, as Book has led the Notre Dame offense is rushing in every game after the Michigan disaster.