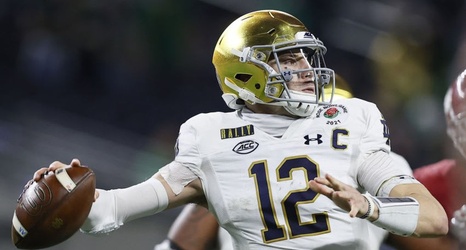 ARLINGTON, TEXAS - JANUARY 01: Quarterback Ian Book #12 of the Notre Dame Fighting Irish drops back to pass over the defense of the Alabama Crimson Tide during the third quarter of the 2021 College Football Playoff Semifinal Game at the Rose Bowl Game presented by Capital One at AT&T Stadium on January 01, 2021 in Arlington, Texas. (Photo by Tom Pennington/Getty Images)

During his time as starting QB for the Notre Dame Football team, Ian Book became a star and was recently included in an exclusive Rookie Premiere Class.

For nearly 30 years, the NFLPA has been putting together a Rookie Premiere Class for first-year players entering the NFL.