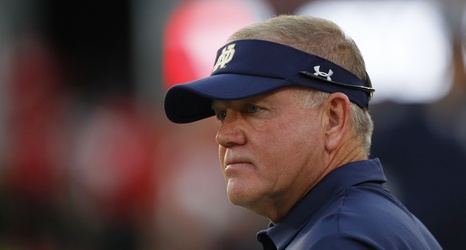 We’re over halfway through October, and the only blemish on the Notre Dame football record at this point is a close loss to Georgia.

If I would have told you that’s where we’d be right now back in July, you probably would have taken it. The Irish are still in the top ten of both major polls and still in the College Football Playoff conversation.

You really can’t ask for much more from Brian Kelly. The people who run The Bobby Dodd Coach of the Year Foundation agree.

Officials from the Bobby Dodd Coach of the Year Foundation and Chick-fil-A Peach Bowl released the midseason watch list for the 2019 Dodd Trophy.