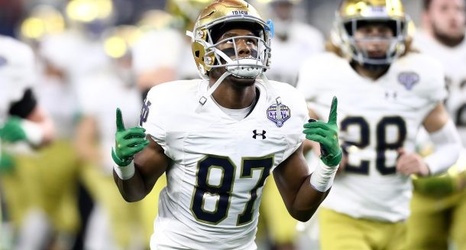 Listed Measurements: 5-foot-10, 190 pounds.
2019-20 year, eligibility: A junior, Young has two seasons of eligibility remaining, including 2019.
Depth chart: As senior Chase Claypool moves to the boundary receiver position from the field (wide) side in place of Miles Boykin, Young steps into a starting role at the field where his speed and strong hands should be of use.
Recruiting: A consensus three-star recruit, Young is the only remaining receiver from the class of 2017, partly due to a late de-commitment in the cycle and partly due to Jafar Armstrong moving into the backfield.