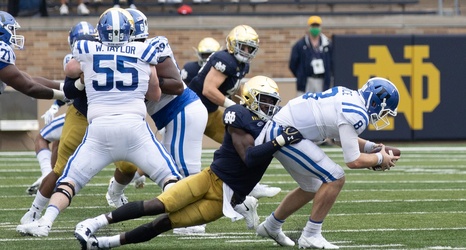 The 1st round of the 2021 NFL Draft came to an end late last night without a single Notre Dame football player hearing their name called among the 32 selections made. Only one, Butkus Award winning linebacker Jeremiah Owusu-Koramoah, was considered to be a likely first-rounder, but the fact that JOK remains on the board as teams prepare for tonight’s second and third round is still shocking.

Jeremiah Owusu-Koramoah is an absolute freak athlete. That is not debatable. He can cover wide receivers out of the slot at the linebacker position and he is a wrecking ball in the backfield against the run – just ask Travis Etienne who coincidentally did get selected in the first round.