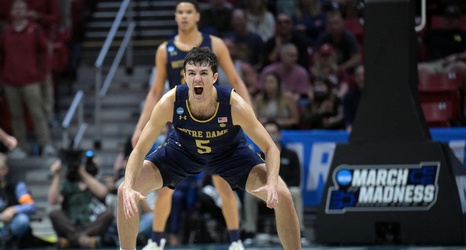 The Notre Dame Fighting Irish men’s basketball team, fresh off a dramatic and exhausting double-overtime victory in the First Four against Rutgers, kept the momentum going this afternoon in the first round, beating the 6th-seeded Alabama Crimson Tide 78 to 64 at Viejas Arena in San Diego.

The Irish were led on the afternoon by Cormac Ryan, who scored 29 points on 10-of-13 shooting (7-of-9 from three) and snagged 6 rebounds. 29 points was not only a career-high for the senior, but set a record for most by one player in the NCAA Tourney under Mike Brey (same with his 7 three-pointers made).