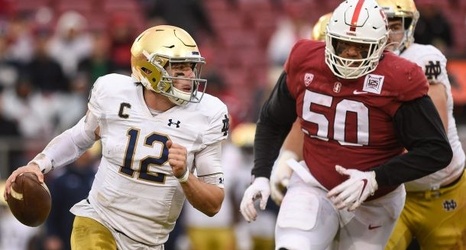 It’s been a long decade at Notre Dame, mostly because all of them are at a place and in a sport under such a microscope. It included three goal-line fumbles returned the other way for touchdowns, all for the Irish opposition. A few quarterback controversies unfolded, at least one of which head coach Brian Kelly acknowledges was handled poorly in the locker room. That 2016 debacle led to a rather thorough staff shakeup.

Coming off the first win at Stanford in that decade, a comparison between the two programs quickly shows one to be consistently very good, at least until now, and one to reach greater heights but endure a frustrating interim between them, although those frustrations seem to be abating these days.