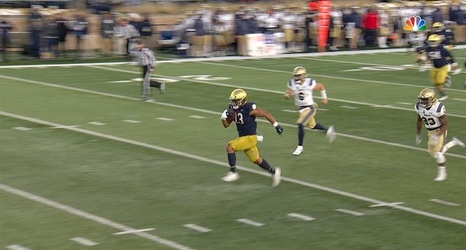 Navy still had a chance at the start of Saturday’s second quarter. Notre Dame led 14-0, but the Midshipmen were near midfield and would receive the kickoff to start the second half. They could reasonably tie the game halfway through the third quarter.

Then a 3rd-and-13 resulted in Irish senior defensive end Khalid Kareem forcing his second fumble of the day, tapping it out of Navy senior quarterback Malcolm Perry’s hands as Perry desperately tried to make a play to convert the needed third down. Four snaps later Notre Dame scored and the route was on in full effect.