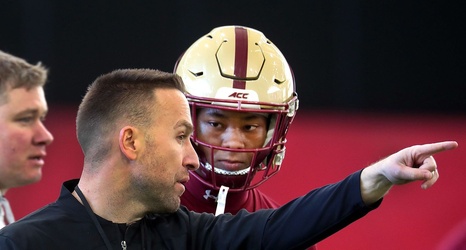 Fresh from a memorable victory over top-ranked Clemson, Notre Dame (7-0) travels to Chestnut Hill on Saturday to face Boston College (5-3). The Eagles are led by first year coach Jeff Hafley and former Fighting Irish quarterback Phil Jurkovec, who transferred there earlier this year. Notre Dame has ascended to the number two position in the polls, and is determined to validate that ranking. They lead the overall series 16-9 on the strength of seven straight wins, including a 40-7 thumping last season. Boston College, as you might expect, has other ideas. The game will be nationally televised on the ABC network beginning at 3:30 PM Eastern time.