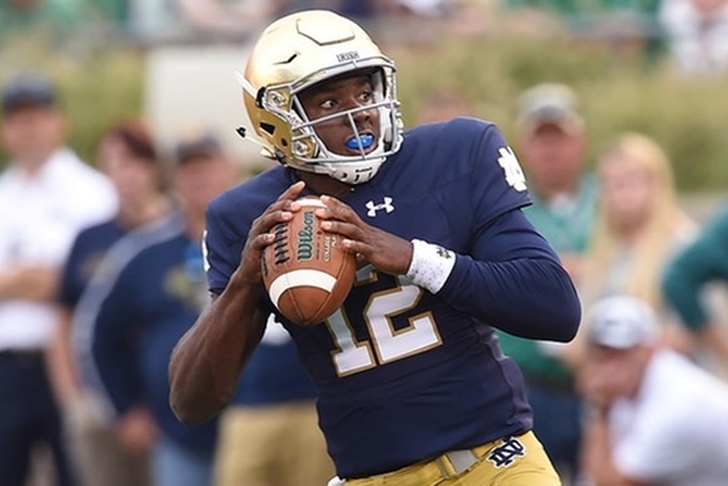 The Notre Dame Fighting Irish have already started spring practice, and they're hoping for a bounce back year after a disappointing 2016 campaign. They will have to replace starting quarterback DeShone Kizer, but the Irish aren't dealing with much turnover. Here is all the latest Notre Dame news & rumors you need to know:

Latest on Brandon Wimbush
Wimbush went into spring practice as the projected starter, and while many expected there to be a small competition for the starting job, that does not seem to be the case - Wimbush has been working with the first team. Head coach Brian Kelly said he wants Wimbush to start developing confidence in himself and with the offense.

"The quarterback position, whether it's at Notre Dame or anywhere else, requires an incredible spirit in itself that you've got to be able to handle so many other things that are outside of football," Kelly said. "What I'm asking him to do are probably more focused on him just taking care of himself. And we've got a lot of good leaders. I'm giving him some leadership opportunities, and I think he's doing quite well.

"But we're not asking him to come in here and lead the entire building. We've got six captains right now. We're going to probably have as many as seven. So he's well supported in that role. He has to have a presence about him. Body language. He's got to have confidence in himself. So those are the areas that I'm spending more time on than him having to take control of the entire football program."

Wimbush was ranked as the No. 3 dual-threat quarterback and No. 45 overall prospect in the 2015 recruiting class.

Josh Adams will be lead back in committee approach
One area of strength for Notre Dame next season figures to be at running back, where Josh Adams, Dexter Williams, redshirt freshman Tony Jones Jr. and freshman C.J. Homes figure to be factors. Most of them will see playing time this season, according to Fansided's Walt Kosin, just Josh Adams will be the lead back.

Josh Adams appears to be the starter at running back, but he will share the duties with Dexter Williams. Dexter will compliment Adams as Notre Dame, over the past few seasons has had two running backs do a majority of the rushing. Look out for Tony Jones Jr. This four-star back will find playing time because he is too good a runner to be left out.

Rotation, rotation, rotation. If film of Wake under Elko is any indication of what he plans to bring to Notre Dame, expect safety rotation into the box at a high rate. Variations of Cover 1, 3/6, and two-deep man under. The focus will be on getting another body in to stop the run, and as a part of the blitz package. Elko’s safety blitz looks exploit the A-gap. Inconsistency at the safety position was alarming under Brian VanGorder, and any improvement under Elko will be a big step in the right direction.