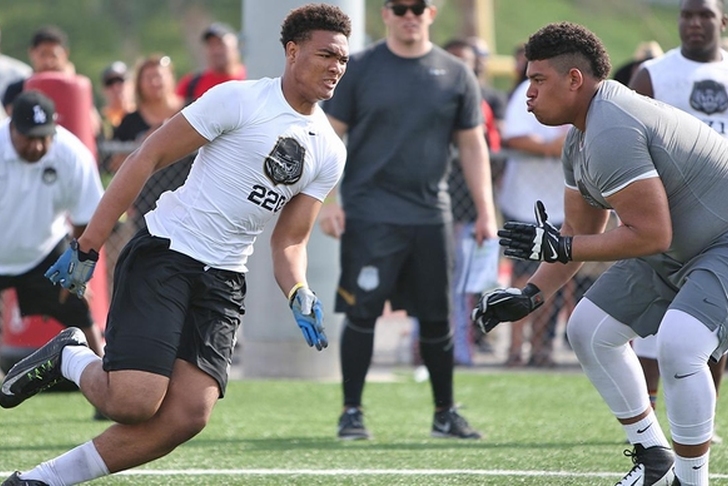 The college football season doesn't start for over a month, giving the Notre Dame Fighting Irish more of time to focus on recruiting. ND has turned up the heat on the recruiting trail during the offseason, and it's already paid off with 17 commitments - but the Irish are far from done. Here are the latest news and rumors surrounding Notre Dame football recruiting.

The longtime Bruins commit opened up his recruitment and decided to focus his attention on 11 schools. Notre Dame, Nebraska, USC, UCLA, Oklahoma, Michigan, Washington, Oregon, Tennessee, LSU and Arizona all remain in the mix.

Notre Dame is expected to be a major player in this recruitment. His trip to South Bend in June for the Irish Invasion was an "eye-opener", as he calls it. Irish247 has made it clear for over a month, even while Echols was committed to UCLA, that this looks like a two-team battle at this point between Notre Dame and USC. Echols confirmed that those two schools are at the top, but added that one as a slight edge.

"Notre Dame and USC are my top two schools right now," said Echols. "They're pretty much equal. I think Notre Dame could be my No. 1 school right now. My visit was just so awesome."

Echols is ranked as the No .7 weak-side defensive end and No. 97 overall prospect in the country.

“Coach Denbrock is a great person. He’s a great guy. He wants the best for me and whatever decision I make. I like him a lot for that because he cares.”

Johnson also said he loves the rest of Notre Dame's staff and the campus, but that Arizona was his home "for now."

ND target invited to All-American game
Four-star cornerback Salvon Ahmed (Kirkland, WA), who is ranked as the No. 1 athlete in the country, was invited to - an quickly accepted - an invitation to play in the U.S. Army All-American Bowl.

“You have no idea how much this means to me,” said Ahmed. “For my community, my family and my team. I’m excited and looking forward to it."

Notre Dame is one of the favorites to land Ahmed, along with Oregon, Stanford, USC and Washington.