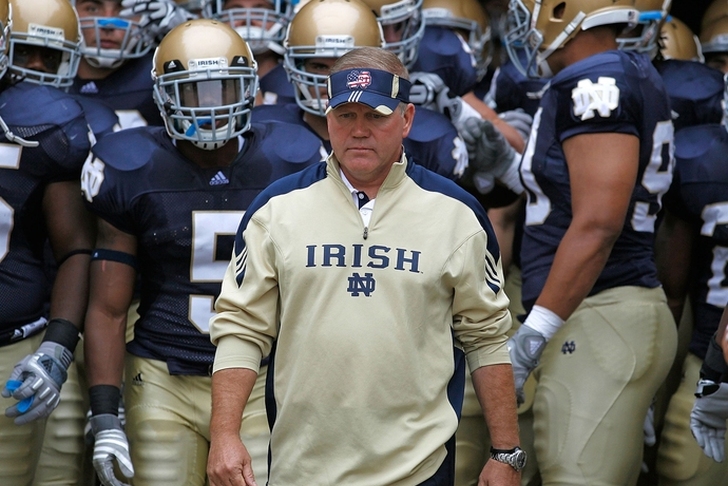 He's one of the best wide receivers in the 2017 class, and you probably don't know his name yet. But Notre Dame's coaches know it, and the Fighting Irish are looking to add him to their . Who is this "he" we speak of? Scroll down to No. 1 on our list of seven top recruits head coach Brian Kelly and the Notre Dame Fighting Irish are targeting. By the way, every player on this list is a top 100 recruit according to 247Sports.com.

7. WR Tarik Black
We're starting with a WR, but not the one we've already mentioned. Black is the No. 94 overall recruit and the No. 15 WR. He's from Connecticut, where he's the No. 1 player. Ohio State, Alabama and Notre Dame are among the early favorites for Black.

6. RB Ty Chandler
Chandler is the No. 87 overall player and the No. 6 RB in this class. Notre Dame is trying to go into Tennessee to land Chandler, and they'll face a tough battle from a few SEC schools.

5. WR Osiris St. Brown
St. Brown is a WR, but he's not the one we teased earlier. He's the No. 79 overall recruit and the No. 12 WR. He's from California, and Notre Dame is the favorite for the four-star recruit.

4. OT Austin Deculus
Deculus is the No. 77 overall recruit and the No. 13 OT in the class of 2017. LSU is currently the favorite to land the Texas product, but Notre Dame offered him in January.

3. DE Robert Beal
He's the first of two players committed to Notre Dame on this list, but he still counts. Beal is a four-star recruit and the No. 50 overall recruit.

2. TE Brock Wright
There isn't a better TE in the 2017 class than Wright. The five-star recruit is the No. 26 overall player and hails from Texas. He's currently committed to Notre Dame, but several schools are still trying to land him.

1. WR Joseph Lewis
And here he is, the No. 23 recruit in the nation. USC might be the current front-runner for Lewis, but Notre Dame isn't far behind. He's already visited Notre Dame unofficially once.