Chat Sports' Coaching Hot Seat: What Brian Kelly Needs To Do To Keep His Job Past 2017 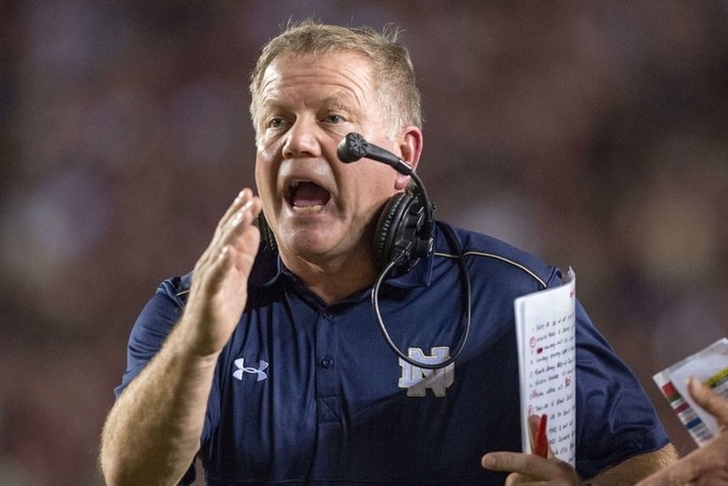 The Notre Dame Fighting Irish are coming off an extremely disappointing 4-8 season, resulting in questions about head coach Brian Kelly's future with the program. He is back for another year in 2017, but another bad year could mean he does get fired after the season. Chat Sports is exploring several coaches who are going into next season on the hot seat, and what they can do to save their jobs.

Obviously, winning more games is what cures all. If Notre Dame gets back to winning nine or 10 games, all of those rumors circulating around Kelly will dissipate. However, here are three other factors that could turn the tide in his favor:

1) Start fast
The Irish play an extremely challenging schedule every year, and the cries for Kelly's firings will only get louder if Notre Dame struggles early in the season. They start the season at home against Temple, who is coming off back-to-back 10 win seasons and against Georgia, will enters 2017 as the favorites to win the SEC East. Then, two of their next four games are at Michigan State and at North Carolina - with USC, Miami and Stanford still on the schedule in the second half of the season.

If the Irish don't win at least three of those four major early-season contests, Notre Dame will face a big uphill battle - and Kelly could even be gone before the end of the season.

2) Avoid any and all upsets
When all is said and done, Notre Dame could go 7-5 or so and Kelly could keep his job - as long as all five of those losses come against good teams like the ones listed above. Last year, losses to Michigan State, Duke, NC State and Navy provided a bigger black mark on the season than the 4-8 record. A program with the tradition and prestige of Notre Dame shouldn't lose to that many lesser teams.

Notre Dame fans can stomach a loss to Georgia or USC - but they won't put up with losses to Boston College or Wake Forest.

3) Show promise, especially on defense
The Irish did play a lot of young players last year, especially on defense, and that led to a terrible year defensively. They ranked 44th in the country in yards allowed per game and 62nd in points allowed, which resulted in the midseason firing of defensive coordinator Brian VanGorder. If they don't improve on that side of the ball, it will be hard to defend keeping Kelly around.