BREAKING: Notre Dame Academic Coach Fired For Pressuring Irish Athletes To Have Sex With Her Daughter 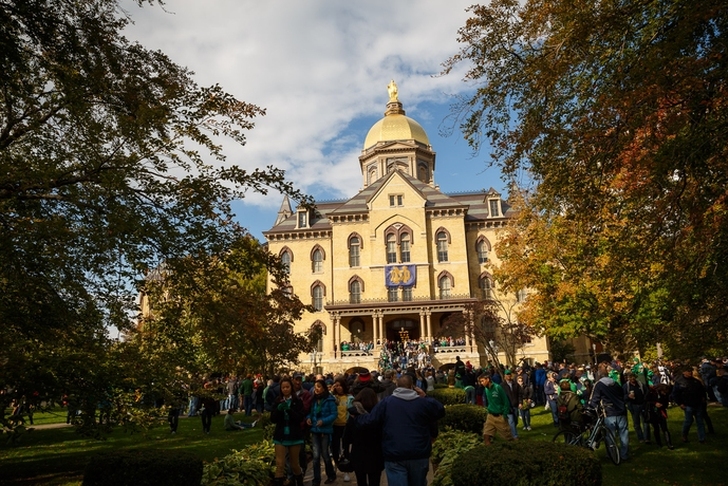 The Notre Dame Fighting Irish have reportedly fired a Caucasian, female academic coach after she "allegedly coerced black football and basketball players into having sex with her daughter,” per the New York Daily News

The New York Daily News added that they had uncovered an internal Notre Dame report which stated that the coach had acted in opposition to the university's "values" and its "discrimination harassment policy."

In addition, a lawsuit was filed Friday against both the employee and Notre Dame itself, per the South Bend Tribune. The suit was filed in St. Joseph County Circuit Court by representation for a male student who claims to be “a victim of sexual harassment and racial discrimination.”

Per the South Bend Tribune report, the suit states that “the employee began providing academic help to the male student this past spring and immediately ‘initiated, directed and coordinated a sexually and racially motivated inappropriate and demeaning relationship’ between the student and her daughter.”

The daughter is reportedly a student at a school nearby.

NBC News has corroborated the report, adding that the plantiff “enrolled at Notre Dame in 2014 and met with the defendant for academic support in spring 2015, at which point she ‘immediately’ coordinated the relationship, going so far as to provide hotel rooms and condoms for them. She also allegedly tried to pressure the student to convert to Catholicism.”

A statement received by USA Today from Paul Brown, vice president of Notre Dame's Office of Public Affairs & Communication, reads that the "allegations against the University of Notre Dame in the complaint are unfounded, as are gratuitous and unfounded references to ‘student athletes’ — an allegation that is nothing more than cynical attempt to attract publicity.”