Notre Dame Football's 4 Most Important Games Of The 2015 Season 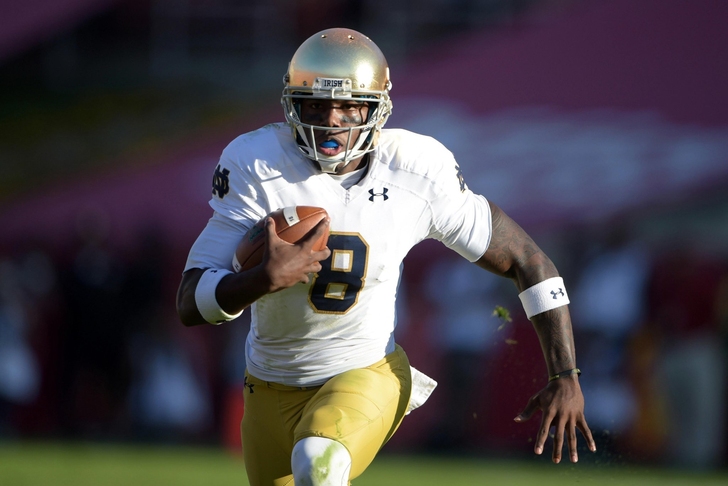 College football's unique in that a single loss could mean the difference between a conference championship (or the ultimate regular-season goal, a College Football Playoff spot) and becoming an also-ran in the FBS ranks. With that in mind, here's our list of Notre Dame Football's 4 Most Important Games Of The 2015 Season.

First impressions can be the biggest, which makes this season opener against the Texas Longhorns a crucial one for the Irish. With all the uncertainty surrounding the program regarding the defense and now unquestioned starting QB Malik Zaire, taking down a Longhorns team that should be improved in head coach Charlie Strong's second year is a good way to quiet the doubters early.

We don't know what to expect from this Stanford team in QB Kevin Hogan's final year, but they do have some intriguing young (and fast) talent on the offensive side of the ball that could provide a major test for an Irish defense who'll be under the microscope. This doesn't necessarily qualify as a "trap game," but it's still one of the marquee road tests on this year's schedule.

This game could very well find its way to prime time, which only means that Death Valley is going to be even louder. Clemson QB DeShaun Watson missed spring practice after undergoing knee surgery in December, but he's still one of a handful of Heisman favorites who makes his home in one of the toughest in-stadium environments in the nation for visiting teams.

Notre Dame/USC is always a massive event, but the fact that USC is a trendy College Football Playoff pick amplifies things. This is the defining statement game on the 2015 schedule and could be a massive resume booster for the Irish's own CFP hopes. It does help that the Irish get Heisman hopeful QB Cody Kessler and the crew in South Bend.