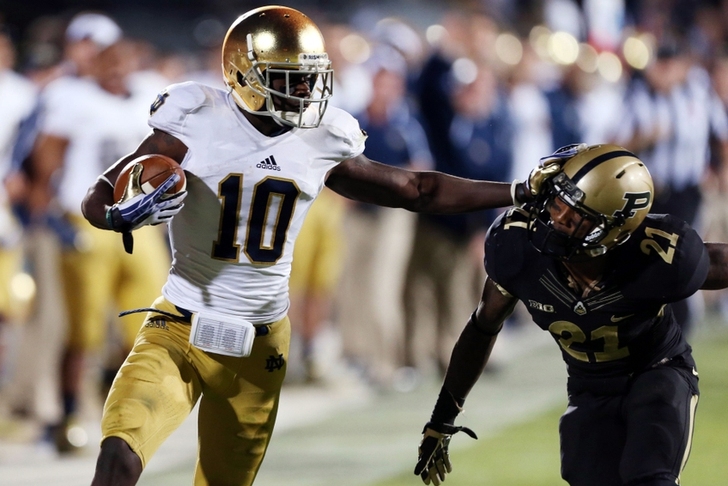 According to rumors coming out of South Bend that have been independently confirmed by our sources, four Notre Dame starters will be expelled (the announcement is coming Friday), and wins from the entire 2012 and 2013 seasons could be vacated.

Update 1:11 PM ET: Our source tells us that all of Notre Dame's wins from 2012 are definitely being vacated. 2013 still unclear.

Update 1:37 PM ET: Yahoo! Sports is now reporting that an investigation into academic fraud at Notre Dame is underway. The investigation goes beyond the football team, and non-athlete students are reportedly also involved.

Update 3:18 PM ET: Notre Dame officials were originally scheduled to address the situation at 3:00 ET, but our source tells us the details leaking early (and the ensuing media blitz) has caused delays. A statement is still expected Friday, but the exact time is unknown.

Update 4:17 PM ET: via @CampusInsiders, up to 22 current and former Notre Dame players could be involved in this scandal, and up to the last four years of wins could be vacated.

Update 5:36 PM ET: Notre Dame has officially addressed their ongoing academic fraud investigation in a press release here. The university will hold a press conference (originally scheduled for 3:00 PM ET) at 6:00 PM ET - you can stream it live online here.

Update 6:18 PM ET: Notre Dame President Rev. John I. Jenkins didn't reveal anything too shocking in his press conference. Jenkins made it clear that the four players in question have been suspended from the football team pending the ongoing investigation, but have not been removed from school or expelled...however, from everything we've heard from our sources in South Bend, it's only a matter of time.

There were some details revealed regarding how this information came to light - apparently, concerns were raised over the summer that athletes had submitted work written by someone else, and in late July Notre Dame began an internal investigation into the matter. The NCAA was made aware Friday morning, which was when the players were officially removed from the team. Jenkins confirmed that Notre Dame will vacate any wins that ineligible players participated in, going back as far as the investigation reveals.

Multiple sources have told us the individuals involved are WR DaVaris Daniels (recently reinstated after an academic-related suspension saw him leave Notre Dame for the Spring semester), CB KeiVarae Russell, DL Ishaq Williams, and LB Kendall Moore. All four are important players for the Irish, and losing them would be a major blow to Brian Kelly's 2014 campaign.

One source close to the football team told us that he thinks the expulsions are academic-related, and another high-level source gave us more details:

Apparently, a university official had been helping football players cheat over the past two years, and owned up to it to their higher-ups. The cheating was not related to Everett Golson's cheating suspension, and Golson is reportedly not involved in this situation.

We're still trying to find out more about this developing situation, and we'll provide updates as they become available.