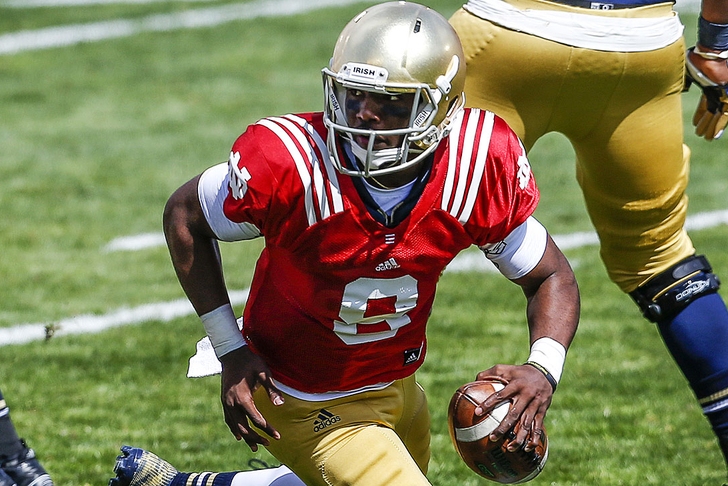 Redshirt freshman quarterback Malik Zaire will make his first career start on Tuesday when the Notre Dame Fighting Irish square off with the LSU Tigers in the Music City Bowl in Nashville, taking over for redshirt junior Everett Golson as the team looks to snap a four-game losing streak.

Turning down the likes of Alabama, Ohio State, Arizona, Nebraska, and Wisconsin, Zaire was Rivals.com's third-ranked dual-threat quarterback in the class of 2013. A lefthander, the 6'0", 210-pounder was named the 2012 Associated Press Ohio Division III Southwest District Offensive Player of the Year after amassing 1,990 yards passing, 1,120 yards on the ground and 33 total TDs (24 passing TDs and nine rushing TDs) for Archbishop Alter High School in Kettering, Ohio.

The year before that, Zaire completed just 36 of 82 throws for 729 yards and five TDs as a junior, but showed how dangerous he was to become on the move by rushing for 1,093 yards and 15 TDs.

His unique combination of mobility and budding passing skills led to him being invited to take place in the Elite 11 quarterback competition in Redondo Beach, Calif., back in the summer of 2012. He was also selected for the Semper Fidelis All-American Bowl, completing two of five passes for 12 yards while rushing nine time for 20 yards for the East squad.

Zaire enrolled at Notre Dame in January of 2013 and is currently pursuing a major in film, television, and theatre in the College of Arts and Letters. He redshirted last season, getting himself acclimated to university life in South Bend.

For Zaire, the opportunity to attend Notre Dame is not just about football - it's about getting to where he wants to go in life:

“I think the school sets you up, not just for a four-year plan, but for a 40-year plan,” Zaire told ISD. “It can take you far in life and help you be very successful once sports are over.

“I think that’s something everybody should look at in recruiting, a place that can set you up for life after sports and somewhere you would love to be not playing sports. I think if you look at it from that aspect, you’ll definitely find the place that you want to be.”

Now Zaire will take center stage against an old rival in the LSU Tigers, as the Irish look to avenge a 41-14 at the hands of LSU back in the 2007 Sugar Bowl.

With one look at this highlight package from Zaire's time in high school, you'll see just how capable he is of leading the Irish to such a huge win.