Notre Dame Football News: Who Runs The Defense With Joe Schmidt Out? 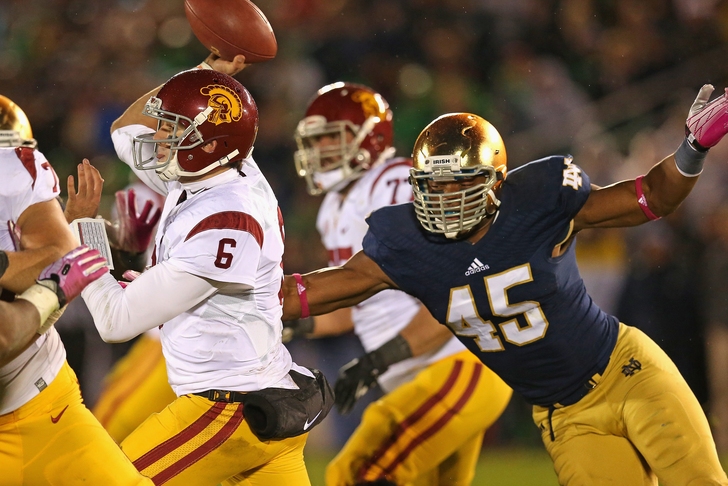 Can't get enough Notre Dame football news and rumors? Be sure to download our 5-star iPhone app today!

With linebacker Joe Schmidt loss for the year with fractured and dislocated left ankle, the Notre Dame Fighting Irish have lost the quarterback of their defense.

With Schmidt out, the Irish will turn to freshman Nyles Morgan at the starting middle linebacker slot. Morgan was coach Brian Kelly's highest-ranked recruit of the class of 2014, so the talent is definitely there. However, the returns were uneven during Notre Dame's close shave against Navy, likely meaning that some growing pains are coming down the turnpike.

New defensive coordinator Brian VanGorder clearly thinks the world of Morgan, but realizes that learning an entire defense at the collegiate level is an extremely tough and time-consuming task.

"It's been tough," VanGorder said during the Irish's bye week, via Matt Fortuna of ESPN.com. "Again, it's a lot of defense and it's been difficult for him to be able to learn it all, let alone then communicate it all, to everybody. So you know, I'll tell you, he definitely has a real resilience about himself. I'm on him a lot. A lot of coaching pressure on him, and he holds up really well. He doesn't flinch. It's going to happen. It's going to come. It's no different than I had rookie linebackers in the NFL, that first year was like, they were confused, they just couldn't do it. And again, I'm hopeful with him, because of his demeanor, that he'll get it. It'll come. And he's got some really, really outstanding physical traits."

The Irish hope those "outstanding physical traits" can quickly translate to results as they attempt to climb up the rankings towards a berth in the inaugural College Football Playoff.