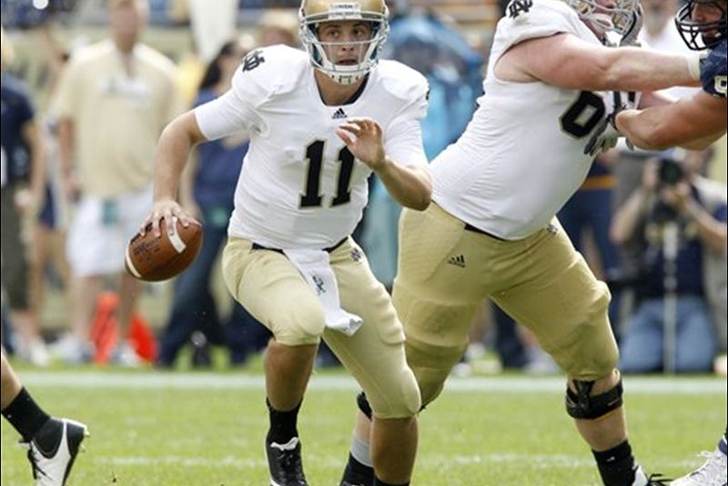 The Fighting Irish got off to a hot start, but couldn't maintain that intensity over the rest of the half. Two 32-yard touchdown strikes from Tommy Rees to DaVaris Daniels in the first four minutes set a terrifying pace, but the Irish were unable to keep the throttle on.

Tommy Rees showed excellent awareness in the pocket and put up some excellent numbers, but his accuracy could have been better at times. On too many occasions, he went for a home run pass when a shorter option would have kept a drive going.

Temple would have clawed back even further if not for two missed field goals from kicker Jim Cooper. The first, a 32-yarder, was badly shanked, and the second (from 43 yards out) was closer, but still missed.

Temple was able to put together a sustained drive midway through the second quarter, thanks to several penalties on the Notre Dame defense. Kenneth Harper scored on a one-yard run very late in the half, but Jim Cooper's extra point was blocked.

The score appeared to rouse the Irish offense, and they responded almost immediately with a a 66-yard touchdown pass from Rees to TE Troy Niklas. with under a minute left in the half added some gloss to the scoreline, but the Irish could (and should) have done better overall.

First half MVP: Tommy Rees. With 3 touchdown passes and 268 yards in the half, Rees was excellent despite a few inaccurate throws.

First half LVP: Tie - Louis Nix III, Elijah Shumate. No one on defense distinguished themselves, but these two were responsible for terrible penalties that extended Temple's scoring drive and prevented a goal-line stand.