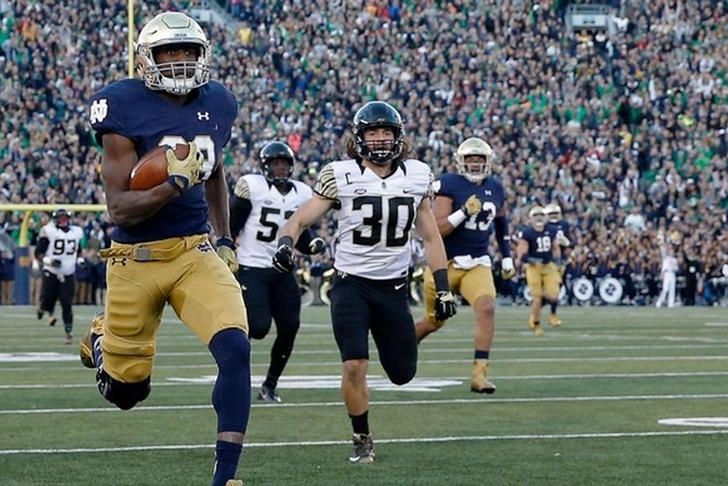 The Notre Dame Fighting Irish currently hold the #4 spot in the College Football Playoff rankings, putting them in position to play for a national championship game if they win their final two games, starting with Saturday's contest against Boston College. Here are three reasons why Notre Dame is guaranteed to beat the Eagles:

Notre Dame head coach Brian Kelly has the luxury of being very cautious with RB CJ Prosise's recovery, even though Prosise has passed through the NCAA's concussion protocol. That's because Josh Adams has been a revelation in his stead. Adams rushed for 141 yards on 17 carries against Wake, including a school-record 98-yard touchdown run. His emergence has given Notre Dame a true three-headed monther in the backfield, along with quarterback DeShone Kizer's rushing ability. Expect all three to have big games.

Boston College is one of the worst offensive teams in the country, ranking dead last in total offense (276.6 yards per game) and 120th in scoring (17.3 points per game). They've been shut out by defenses much worse than Notre Dame's - they probably won't hit double-digits in this game.

Many thought Notre Dame was doomed when Malik Zaire went down, but that hasn't been the case. DeShone Kizer has stepped up in an incredible way, is playing better than Zaire was expected to. If Kizer keeps playing this well, and he should, Notre Dame has a great chance to run the table. He's passed for over 200 yards and at least one touchdown in seven of his eight starts this year while rushing for 327 yards and eight touchdowns over that span. Boston College does have a great defense, but Kizer has the ability to shred them.