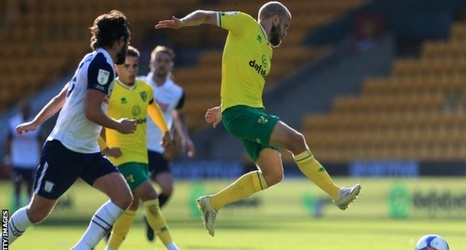 Przemyslaw Placheta rescued a point for Norwich as they drew with Preston in front of 1,000 fans at Carrow Road.

Preston took an early lead as Scott Sinclair sent Tim Krul the wrong way from the penalty spot after Ben Davies went down under an Oliver Skipp challenge from a corner.

But Polish midfielder Placheta, a summer signing from Slask Wroclaw, fired home at the second attempt to delight the home fans at one of several Football League games piloting the return of supporters.