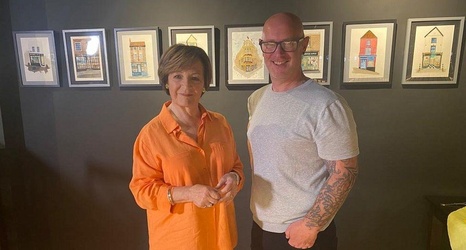 An artist who only picked up his first paintbrushes four years ago has sold a series of 101 paintings of Norwich he did during lockdown to celebrity chef and Norwich City director, Delia Smith.

Nick Chinnery said he was "astounded" when Ms Smith's office contacted him asking if the series was for sale.

The watercolours, featuring historic buildings around the city, have gone on display at Delia's football club bar.

"He's captured what is a very beautiful city. If I'm honest, I didn't realise it's as beautiful as it is," she said.