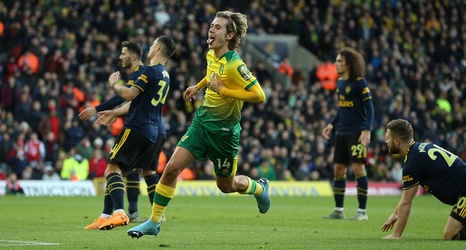 Norwich City battled to a more than deserved point at home to Arsenal on Sunday afternoon.

Teemu Pukki gave the Canaries the lead on 29 minutes via a deflected effort but Arsenal quickly responded after Pierre-Emerick Aubameyang equalised from a retaken penalty, despite having his first saved by Krul.

Todd Cantwell fired City into the lead on the stroke of half-time but Aubameyang responded once again on the hour mark as the game ended in a draw.

Daniel Farke was forced into one change to his starting eleven after last weekend’s win at Everton.