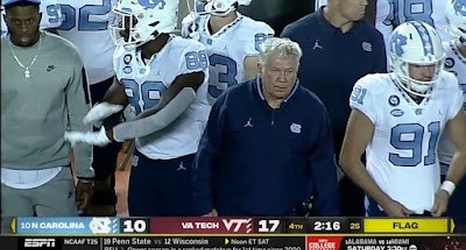 Many people attempting to tune into Northwestern football last Saturday had the experience of watching Mack Brown make the exact face of an alderman who has returned home to see that the FBI is ransacking his office for documents and then within seconds the broadcast switched to show Northwestern lining up to block an extra point already down 6-0 after 13 seconds, and the game never really improved over that.

With the exception of last year's unexpected and inspired buttkicking of a pandemic-discombobulated Maryland team, it is not uncommon for Northwestern to stumble around the opening portion of its season, at some point desperately fending for life while down to a school that has just started playing a football again after some tough-looking guys showed up on campus one day in a van.

See full article at Bring Your Champions, They're Our Meat