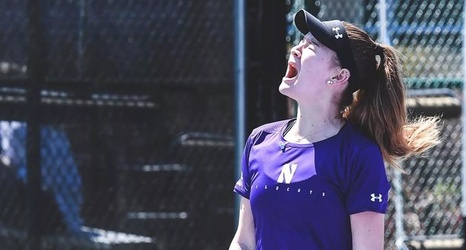 After riding a three-game win streak into the Big Ten Tournament, the team aimed to avenge an (at the time) upset loss to Michigan. To compete with the Wolverines in this year’s semifinal, the Wildcats would first have to get through the fourth seed, Ohio State, in the opening round.

The match opened with the ‘Cats taking the doubles point thanks to wins at second and third doubles, before Clarissa Hand checked in with a quick 6-2, 6-3 victory at first singles to give Northwestern a 2-0 lead. Julie Byrne continued the momentum at second singles, earning another resounding win, 6-4 6-2.