Northwestern finally falls, losing 21-13 to Syracuse in the Final Four 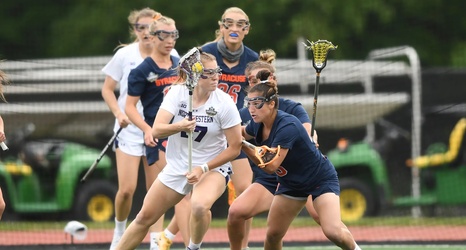 TOWSON, MD — All good things must come to an end, and even worse, that end is sometimes less than stellar.

After playing nearly flawless ball all season on the road to a Big Ten Championship, an undefeated record and one of the greatest offensive seasons the NCAA had ever seen, No. 2 Northwestern (15-1) was trounced in their Final Four matchup against the No. 3 Syracuse Orange (17-3), losing by a score of 21-13 on Friday afternoon.

At first it appeared that it might be a fine — although wet — day inside Johnny Unitas Stadium, as the ‘Cats wasted no time flaunting that historically great offense when Lindsey McCone found the back of the net less than a minute into the game, giving NU a quick 1-0 lead.