Wrestling: Jaydin Eierman shines in his first opportunity to compete in front of Iowa fans 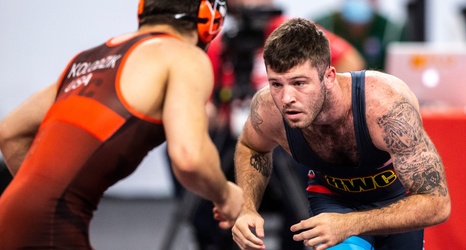 CORALVILLE, Ia. — Jaydin Eierman got a small taste of what life as a Hawkeye wrestler is like this weekend.

The senior was at the center of the crowd’s attention inside Xtream Arena, home of the 2020 U.S. Senior National Championships this weekend. He wore Hawkeye Wrestling Club singlets, as if to officially announce his arrival. He even received occasional pre-match slaps-to-the-face from Iowa associate head coach Terry Brands.

In response, Eierman gave the sizable black-and-gold contingent reasons to cheer. He ultimately went 5-2 and took fifth at 65 kilograms (143 pounds). He made a run to the semifinals and finished in the top eight at arguably the tournament’s deepest weight.