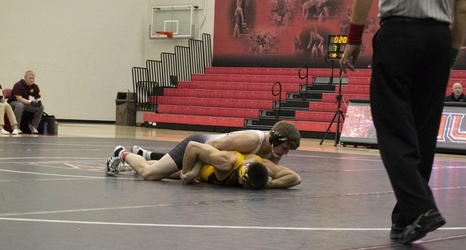 DeKALB — The wrestling team set a quick pace Saturday with a 29-9 win over the Southern Illinois University-Edwardsville Cougars, highlighted by a pair of first-round pinfall wins.

Redshirt sophomores Bryce West and Brit Wilson both picked up first-round pinfalls in their matches at 125 pounds and 184 pounds , respectively. With his win, West matches his win total from last season when he earned an NCAA Tournament bid.

Head Coach Ryan Ludwig said the team’s energy is what stood out in a dual where the team won seven of ten contests.

“Those guys competed hard and worked out there,” Ludwig said in an NIU Athletics news release.