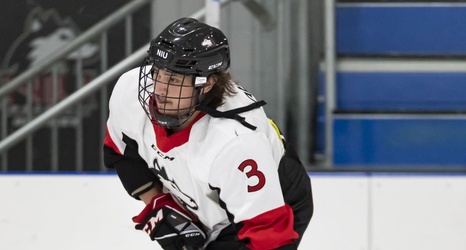 First-year defenseman Drake Gieseke prepares for a pass Nov. 9 during a home loss to McKendree University at Canlan Ice Sports in West Dundee.

DeKALB — The hockey team went down early and never recovered in its loss Friday to the University of Toledo.

NIU dropped game one of a two-game set by a score of 8-3 at the Team Toledo Ice House. The win snapped an eight-game losing streak for the Rockets.

In the first period, NIU was trailing by a goal before first-year forward Rodahn Evans was boarded by Rockets senior forward Nik Verbosky.