Men's soccer notches its first win of the season 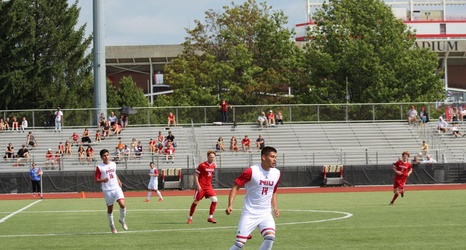 DeKALB — The Huskies have a reason to celebrate after earning their first win of the season. A hot first half carried the Huskies to an impressive 2-1 victory against Bradley University.

With over 30 minutes passing in a physical first half, the Huskies were able to score their first goal courtesy of senior forward Jan Maertins. Maertins hit in a laser shot after receiving a pass from sophomore forward Nick Markanich. The Huskies kept attacking the goal, shooting five shots, including a second goal.

Two minutes after the first goal, Nick scored the second of the match, after receiving a pass in the box from his twin brother, sophomore defender Anthony Markanich.