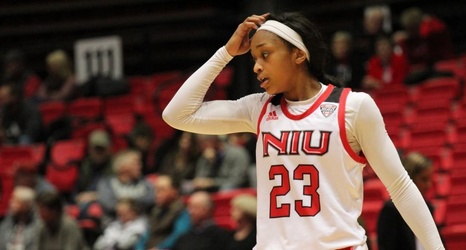 DeKALB — The women’s basketball team ended its three-game losing streak Wednesday against the Eastern Michigan University Eagles. NIU defeated EMU 65-59 in a game where both teams had a combined 39 turnovers.

“It’s always good to get the win you know, obviously at home as well, they have been a little few and far between, so we are not giving any back,” Head Coach Lisa Carlsen said. “It was not the prettiest basketball game to say the least, but I was proud that we found a way to get it done, I think that it’s important as we try to build a little bit of momentum going into the conference tournament.