Seth Littrell may become the topic of job speculation, but he's focused on his 'great opportunity' at UNT 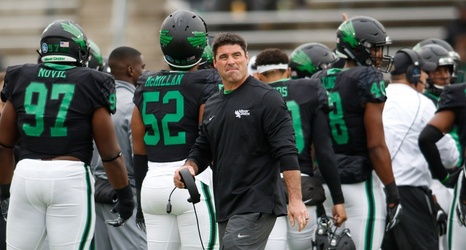 DENTON -- North Texas coach Seth Littrell knows there are two ends of the coaching spectrum during the final weeks of the regular season.

One of them features a settlement check and unemployment. The other is speculation about moving up for a bigger job. Given those two options, the Mean Green's third-year coach naturally prefers the latter.

Even though the Mean Green (7-3, 3-3 Conference USA) are coming off a humbling loss and a relatively tough stretch, Littrell appears to have the brighter career outlook of the two coaches who will be on the field for Saturday's game between UNT and Florida Atlantic (5-5, 3-3 C-USA).