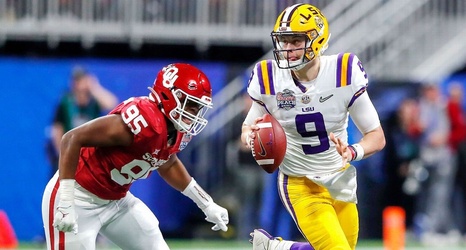 ATLANTA -- Forget about a Heisman jinx.

LSU quarterback Joe Burrow picked up where he left off against Oklahoma in Saturday's College Football Playoff semifinal at the Chick-fil-A Peach Bowl at Mercedes-Benz Stadium.

Burrow, who won the Heisman Trophy earlier this month in the most lopsided vote in history, threw seven more touchdowns -- all of them in the first half -- and ran for another score in the No. 1 Tigers' 63-28 rout of the No. 4 Sooners.