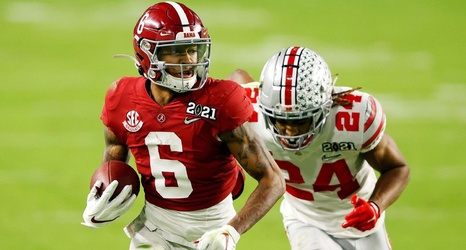 It's been quite the night for Alabama WR DeVonta Smith, who caught three touchdowns in the FIRST HALF of the College Football Playoff National Championship game against Ohio State.

The Heisman Trophy winner's stats say it all -- 12 receptions for 215 yards and three touchdowns. And he also broke three SEC records.

Naturally, Smith set the Twitter world aflame with his performance.

Even noted Buckeye fan LeBron James could only praise Smith:

DeVonte Smith is one of the best pure receivers I've ever watched! Like a mix between Reggie Wayne and Marvin Harrison.