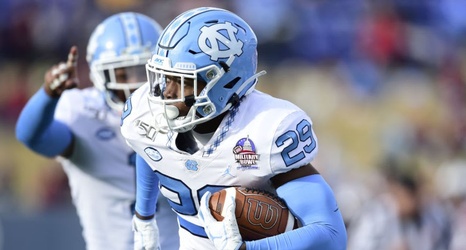 ANNAPOLIS, MD - DECEMBER 27: Defensive back Storm Duck #29 of the North Carolina Tar Heels runs back an interception for a touchdown in the second half against the Temple Owls in the Military Bowl Presented by Northrop Grumman at Navy-Marine Corps Memorial Stadium on December 27, 2019 in Annapolis, Maryland. (Photo by Patrick McDermott/Getty Images)

Despite losing a lot of talent on offense with the departures of Javonte Williams, Michael Carter, Dazz Newsome and Dyami Brown as well as Chazz Surratt on defense, the UNC Football program is still returning the majority of their starters from that Orange Bowl game against Texas A&M.