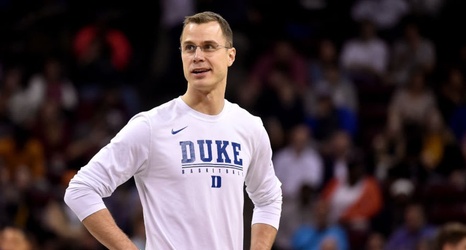 COLUMBIA, SC - MARCH 21: Associate head coach Jon Scheyer of the Duke Blue Devils looks on during their practice session prior to the first round of the 2019 NCAA Men's Basketball Championship at Colonial Life Arena on March 21, 2019 in Columbia, South Carolina. (Photo by Lance King/Getty Images)

The UNC Basketball program has been in pursuit of four-star forward De’Ante Green for over a year now. The Tar Heels officially offered Green back in December when Roy Williams was still the head coach and even with the switch to Hubert Davis, the pursuit is still on.