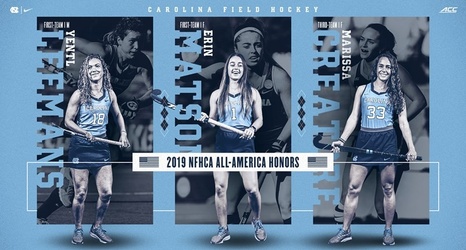 CHAPEL HILL, N.C. – On the heels of UNC's second consecutive undefeated season and NCAA field hockey title, three Tar Heels have been recognized with All-America honors, as announced on Tuesday by the National Field Hockey Coaches Association. Senior Yentl Leemans and sophomore Erin Matson were named to the first team and senior Marissa Creatore was named to the third team.

Matson was honored for the second year and becomes the 20th player in program history to earn first-team All-America honors more than once. This year's honors are the first for Leemans and Creatore.