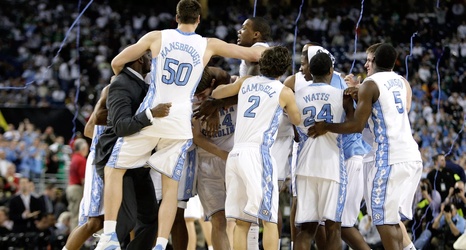 There was a held ball after the opening tip. Tyler Hansbrough and Michigan State’s Travis Walton dove on the floor, each trying to wrestle the rock from the other’s grasp before the refs whistled the play dead. Since there had been no established initial possession, with 19:57 on the clock there was a second opening jump ball. If you looked very closely, you would see the last moment that the 2009 National Championship was competitive.