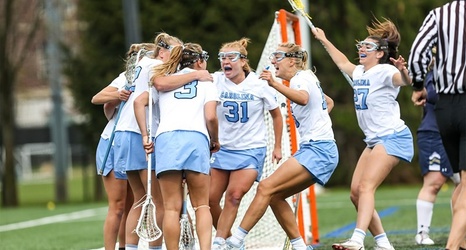 NOTRE DAME, IND.—Top-seeded North Carolina spotted Notre Dame a 5-0, first-quarter lead before roaring back to take the lead and hold off the fifth-seeded Fighting Irish, 14-13, on Sunday afternoon in an Atlantic Coast Conference Tournament semifinal at Arlotta Stadium.

Carolina trailed, 5-0, in the first quarter before going on a 12-1 run to take control, then holding off a late rally to win the game.

With the win, the Tar Heels earned the right to host the ACC championship game on May 7 in Chapel Hill. UNC is seeking its sixth consecutive ACC title, which would tie the longest streak in conference history (Maryland won six in a row from 2009-14).