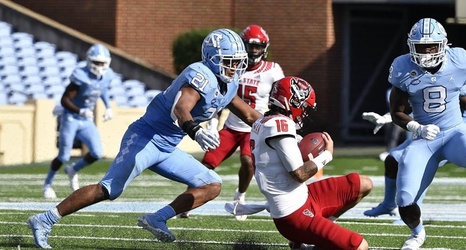 GREENSBORO, N.C. – For the second time in 2020, North Carolina linebacker has been named the ACC's Linebacker of the Week following another outstanding performance last weekend in the 48-21 win over NC State.

The selections are determined by a vote of a 16-member media panel.

LINEBACKER – Chazz Surratt, North Carolina, Gr., LB, Denver, N.C.
Recorded a team-leading eight tackles, a sack, a forced fumble and his second career interception in the No. 14 Tar Heels' 48-21 win over No. 23 NC State • Named ACC Linebacker of the Week for the second time this season (also Sept.