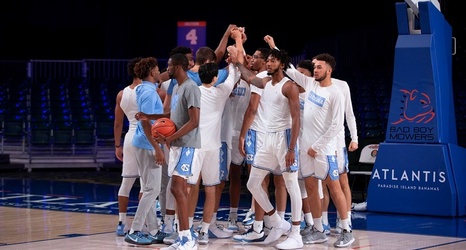 PARADISE ISLAND, Bahamas--In the immediate aftermath of Carolina's improbable 78-74 victory over Oregon in the Battle 4 Atlantis, Cole Anthony was sprawled flat on his back on a treatment table in the makeshift Tar Heel locker room.

He was mostly alone in the room, his right shoe was off, and athletic trainer Madison Corona had wrapped his right ankle. He had his cell phone in his right hand, and he was scrolling through Twitter when he came upon a highlight clip from the game he had just played. The clip, of course, was the 6-foot-3 Anthony rising above the rim to reject a dunk attempt by Oregon's 6-foot-7 Shakur Juiston.