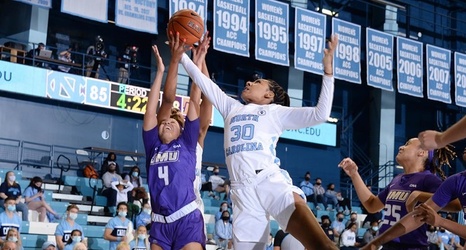 We all know that if Santa Claus played basketball, he'd be a point guard. After all, he's quite the talented distributor.

The Carolina women's basketball team has fully embraced the idea of December being a time of sharing and giving. How? Well, check this out. The Tar Heels have handed out 47 assists on 80 made field goals in their last two games, both convincing wins at Carmichael Arena over James Madison and UNC Asheville, respectively. Carolina has scored 200 combined points in the wins, including 107 against Asheville in the highest-scoring game for the Tar Heels since 2013 and highest-scoring at home since 2011.