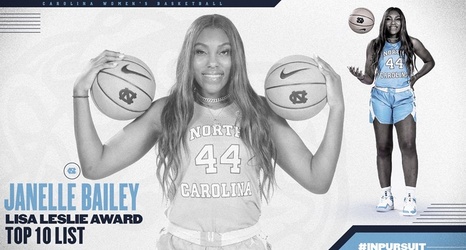 For the third year in a row, North Carolina's Janelle Bailey has been named one of 10 finalists for the Lisa Leslie Award, which is presented annually to the nation's top center. Bailey, from Charlotte, N.C., is averaging 14.1 points and 8.3 rebounds, both team highs, for the Tar Heels.

With a double-double on Thursday against Florida State, she now has 41 for her career, which ranks third among all active Division I players. She also ranks 17th in career points and sixth in career rebounds, and she's the highest-ranked ACC player in each of those three categories.