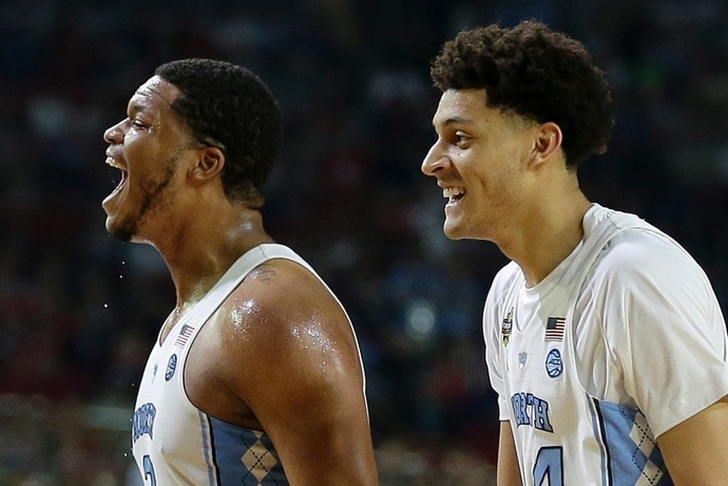 We didn't get the buzzer-beater we got last year in the college basketball national title game, but we were treated to another close contest that wasn't decided until the closing moments.

Trailing by two points with less than two minutes to play, Justin Jackson scored the go-ahead basket and Isaiah Hicks followed with a tough layup with less than 30 seconds left to give the North Carolina Tar Heels the 71-65 win over the Gonzaga Bulldogs, capturing the program's sixth national championship.

Jackson and Hicks both struggled from the floor all night, combining to shoot 11/28 from the field, but came through when it mattered most. Joel Berry II led all scorers in the game with 22 points and was named the Final Four's Most Outstanding Player.

The Heels won this game with their defense in the second half, holding Gonzaga to less than 30 percent shooting after halftime before closing the game on an 8-0 run.

Early on, the Bulldogs were in control of the game. Led by 13 first-half points from Josh Perkins, Gonzaga built a 30-23 lead. However, North Carolina closed the half on a 9-5 run, cutting the deficit to just three points at the break.

That run continued into the start of the second half as they captured the lead and held it essentially for the rest of the game.

Nigel Williams-Goss finished with 15 points, nine rebounds and six assists to lead Gonzaga, but did so on just 5/17 shooting. He also missed two shots in the closing moments that would have given the Zags the lead, but an ankle injury he suffered in the final two minutes was clearly hampering him.

Perkins finished the game with those 13 points, and star big man Przemek Karnowski was limited to just nine points on 1/8 shooting.